When I was writing How Is Travel a Folded Form?, I was thinking about photography among other things, and I wrote some sections that considered historical photographs and suggested the ways that the photographic frame might interleave with the tourist worldview.

I did not know at the time that Isabella Bird, who lives again in my book, actually did become a photographer at a time when that medium was still fairly new, requiring clunky equipment, and at a time when she herself was 60 and not in good health. This was after she wrote A Lady’s Life in the Rocky Mountains, which I quote extensively in the book. She became rather accomplished. 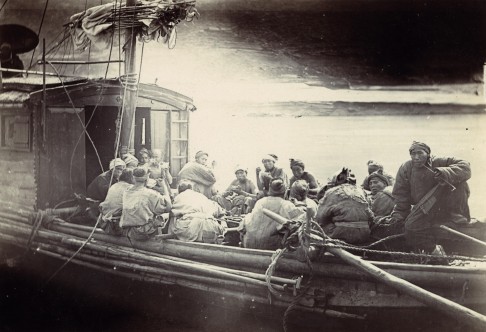 She keeps evoking my admiration!

Here are two excerpts from that part of my book:

Isabella goes off to study photographs. First she wants to learn how to see in frames. She takes notes:

William Henry Fox Talbot’s Articles of Glass, a salt print from a paper negative, 1844, three shelves with 19 glasses and champagne flutes and pitchers and decanters, arranged symmetrically. Containers, empty, three-dimensional, hover against a velvet darkness, their roundness limned by suggestive curves and grooves.

Next Isabella wants to learn why things are gathered inside, just so. She takes notes:

Eugène Atget, 1926-27, Magasins du Bon Marché. The photograph presents glass as both window and mirror. Five mannequins behind a shop window, wearing long coats and hats, their gazes thrown in all directions. They stand on a stage, among opposing objects, indifferent and hidden. Their faces or feet are occluded by furniture and especially by the window’s reflection of the Paris street: tall buildings, balconies, more windows. Is Atget himself in the reflection? No, he has taken a diagonal stance that strikes his own figure from the image. Yet his rectangular frame gathers the floating planes, the slow, silent chaos, the lonely, diagonal gazes into something ordered and honest. Everything stands still inside the corners. Silver print from glass negative.