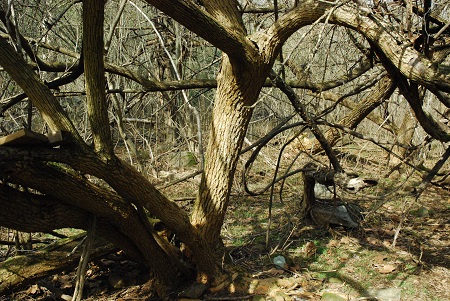 From Donald Harington’s novel The Architecture of the Arkansas Ozarks:

“Fanshaw’s dwelling, like the others, was made of long slender poles cut, appropriately enough, from the bois d’arc tree, or Osage-orange (I will discuss in due course the significance of the name bois d’arc, still today called “bodark,” which fits so perfectly with all the other thumping arks of our study). Both ends of these poles were sharpened and then the poles were bent like a bow and the ends stuck into the ground, forming a large arch which was actually a parabola–and most architectural historians agree that the parabolic is the most graceful, not to say strongest, of all arch forms….These arched poles were interwoven as they crossed in the smoke-hole at the top; the result was literally a paraboloid, an inverted basketry paraboloid….

“Fanshaw’s bow was a large one, made of well-seasoned wood from the bois d’arc, coincidentally the same tree that his house was made of… Bois d’arc is of course French and may be translated as Bow Wood, which is one of its names, the others being ironwood, yellowwood, hedge, mock orange, and Osage-orange, the last two referring to the fruit, which is a large yellow ball vaguely resembling an orange but which, as any schoolboy who has ever bitten into one has discovered, is quite bitter. “Osage-orange” is so called because the Osages used it to make their bows with, also their houses.”

These two passages delighted me, for several reasons. 1. I never knew the name “bodark” for the Osage-orange tree, but will now love it forever. 2. My family of origin has our own name to add to the tree’s long list of monikers: “Oh! St. George,” which grew from my younger brother’s mishearing of the name Osage-orange. 3. The form of the tree itself is bowlike, as may be seen in my photo of the bodark grove on my property. I wonder if the “arc” in “bois d’arc” refers to the growth habit of the tree, or to the bows which were made from the very hard wood? The arching branches do suggest dwelling-places.

A favorite and redolent tree; when it grows in rows at the edges of old fields, it marks human habitation and neglect, having been planted as a natural fence decades ago. The fruit smells delicious. 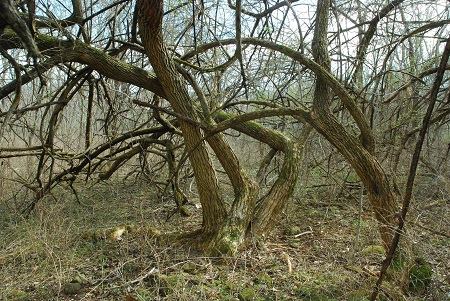