A mud dauber wasp began building a nest inside our front door. It made this in less than 24 hours. 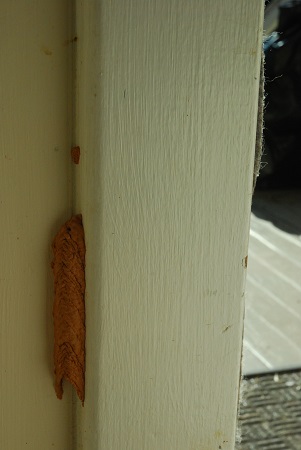 One day, we had to keep the door locked for a whole day while we were away, preventing it from flying in and out, and it seemed to give up on construction. Another had been building on the inside of the window right over my bed. I will take these as friendly gestures.

Wendell Berry: “As [mud daubers] trowel mud into their nest walls, hum to it, or at it, communicating a vibration that makes it easier to work, thus mastering their material by a kind of song. Perhaps the hum of the mud dauber only activates that anciently perceived likeness between all creatures and the earth of which they are made. For as common wisdom holds, like speaks to like. And harmony always involves such specificities of form as in the mud dauber’s song and its nest, whereas information accumulates indiscriminately, like noise.”

I am having a Wendell Berry week (Saddle Road‘s Don Mitchell sent me this piece he wrote, in which Berry makes a cameo appearance) and, it seems, also an insect-song week. (This too.) I take these occurrences, also, as friendly gestures.